Here you can find the latest Pokemon Go cheats, tips, tricks, and hacks for Android and iOS devices such as iPhone. There are at least 10 free Cydia apps available in the Cydia App Store giving you all the cheats you want for Pokemon Go. For example, you can use a map hack to fake your location. You can move around anywhere in Pokemon Go even you are sitting in a coffee shop because these hacks change your location with the built-in GPS in your phone. You can also use an egg hack to hatch more eggs without actually walking around. Does all these cheats sound interesting to you? If so check out the list of best Cydia tweaks for Pokemon Go. Most of these apps are free to download to your iPhone, iPad or iPod Touch.

PokemonGoAnywhere is currently the best Cydia app for gamers who want to fake their location. Once you have installed this app, there is a control panel appear within your screen. You can see up, down, left and right arrows. These arrows allow you to move around in Pokemon Go without actually walking around. You can go to UK even you are in the United States. The Cydia source for PokemonGoAnywhere is williamlcobb.com/repo. It is a third-party server so use it at your own risk.

This is a brilliant app to make catching easier. You can catch a Pokemon by tapping your device’s screen. You can also install this app if the eggs not hatching properly in your Pokemon Go. In addition, there are also features like chatting with people nearby, adding a joystick to your Pokemon Go, fake location, patrol mode and others. To install Poke Go++ for free, add HackYouriPhone repo.

This Cydia tweak doesn’t give you many hacks or tips for Pokemon Go. However, it allows you to play the most wanted game on your lockscreen. You don’t have to unlock your iPhone or iPad to play the game with full extend. It is a free app and can be installed form repo.ziph0n.com repo.

Again, no Pokemon Go cheats in this app but you need this app in order to play the game. Pokemon Go is not working if you are playing it on a jailbreak iOS device. Here you need Masterball. It is a powerful app which by pass all the jailbreak checking in Pokemon Go. To download Masterball for free, add cokepokes.github.io repo. Github repo is currently the best one that hosts this app. If Masterball is not working for you, try its alternatives which is tsprotecter9 or PokePatch.

This app makes your Pokemon Go even more awesome with joystick feature. You can walk in Pokemon Go without moving out using the overlay joystick to navigate in any direction. This is the best app for Android users who want to fake location in any Android phones or tablets. To run this app, you must install the module and enable in Xposed. Also, go to Settings -> Developer options -> Enable mock location (for all Android versions below 6.0) or Select mock location app (for all Android versions above 6.0+). It works flawlessly! It has been tested on a few popular Android devices such as Samsung Galaxy S7/S6 Edge/S5/S4/S3/S2, Samsung Galaxy Note/Note 2/Note 3/Note 4, Samsung Galaxy Gab, Nexus 5X, Nexus 6P, LG V10, LG G5, OnePlus 3, Huawei Ascend, HTC One 10, HTC One M8, Google Nexus 7, Sony Xperia Z C6603, HTC Desire and much more. 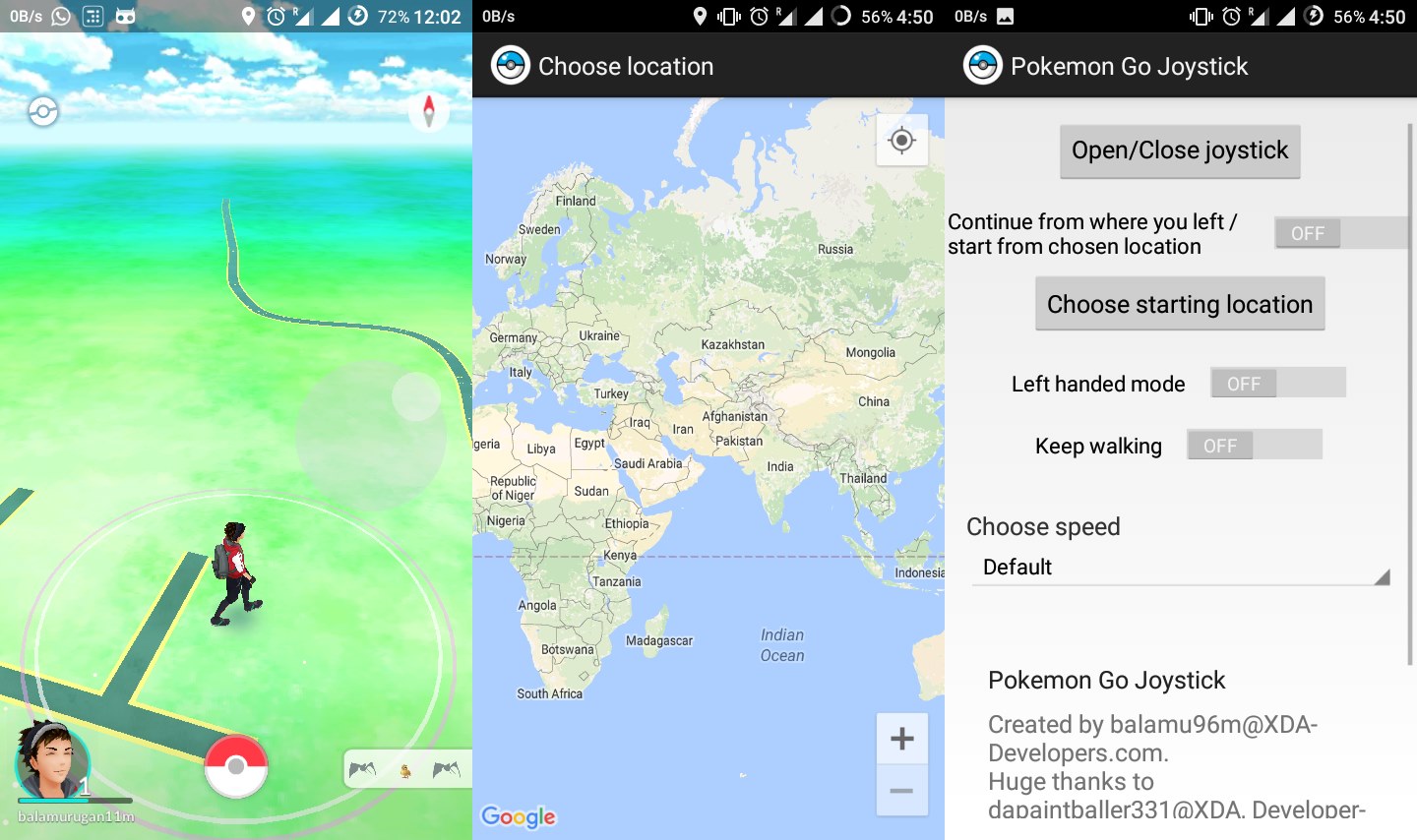 For those who are wondering how to add Pokemon Roms on phones and play them on your iPhone, iPad or iPod Touch, you can add this Cydia source: cydia.myrepospace.com/romhacks/. This third-party repo is developed by a user browniebiznatch from Reddit. It works on all jailbroken iOS devices and comes with pre-patched ROMs for you to install on your iDevice. Good luck in hunting a wild Pokemon and see how Eevee evolves!