Downloading apps are like traveling. There are places you can’t miss and there are some awesome apps you must download and try them on. November has finally arrived and it is necessary to cherish every app built by developers who spent a lot of time and effort to create them. But since there are thousands of Cydia repos and sources available in the Cydia Store, it will be more precise to introduce you the top six best Cydia repos in this beautiful month. 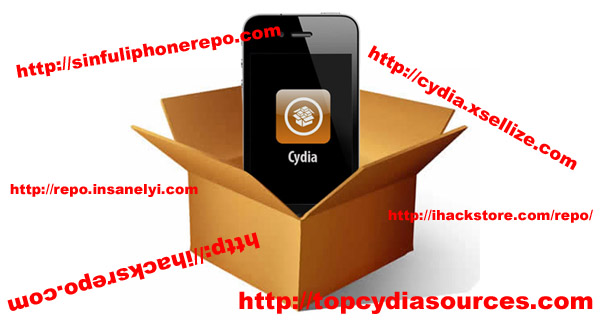 Sinful iPhone is a popular Cydia repo that is well known in international jailbreak community. Almost all the free apps finder love this super handy repo because it hosts a large amount of cracked Cydia apps, themes, games, emulators, mods, tweaks, ROM packs, and some other awesome stuffs. Currently, there are approximately half a million of active members in the Sinful iPhone community.

Pay attention to the mobile world and you would notice xSellize is frequently mentioned. This is not because of the name sounds delicious but the ability to provide free emulators and ROM packs for gamers who dying to play games in the ‘80s and ‘90s. It might not be the best Cydia repo but it provides what you need the best.

iHacksrepo is one of the best Cydia repos in 2013 and unquestionably it will hold its ranking until 2014 or perhaps 2015. This repo hosts one of the best apps which allows you to download apps from App Store for free – Zeusmos. Other than Zeusmos, it also hosts some awesome Cydia tweaks, mods, themes, and games.

Gamers who look for cheat codes need iHackStore. Theme lovers who want the latest theme need iHackStore. Other than that, latest tweaks, ringtones, apps, and mods are all packed into this repo except cracked apps.

ThemeItApp has only three packages but all of them are very functional. Download this Cydia repo and you will know how wonderful the packages are. They allow you to modify and customize the look of your iOS device in any way you want. If you want the look of iOS 7 but prefer to use iOS 6 in your device, you can use the app in ThemeItApp to customize your device and make it looks exactly like iOS 7.

What most people want when they access a Cydia repo? They want free apps, nice themes, challenging games, awesome business related apps, ringtones, and any app that allows them to customize their iOS device. Guess what? Insanelyi has all of them. You can customize an iOS device in any way you want with this repo from Cydia. There are thousands of packages available in the server and it is increasing everyday. Many developers upload their work to this repo and make it one of the best Cydia repo on earth.

Other than the listed Cydia repo, it has to be altruistic to say that these are some other good Cydia repos that loved by many Cydia users: BigBoss, ModMyi, Intelliborn, BiteYourApple, Hackulous, and iSpazio. See also: Top 10 Cydia sources, Good Cydia Sources for iPhone 4.